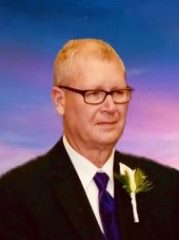 Steve was born on April 17, 1952 in Lamar, CO, to William and Frances (Degan) Sunday.  He attended high school at Wentworth Military Academy in Missouri and graduated in 1970.  He then graduated in the 26th class of the Nebraska Law Enforcement Academy in 1972.

He married Patricia Smith in Columbus, NE on July 16, 1977.  They enjoyed 43 years of marriage together.  They raised two sons, Jason and Scott, and two daughters, Tricia and Angie.

Steve, affectionately known as “Chief” to most, spent close to 49 years of his life in law enforcement, protecting and helping the citizens where he lived and worked.  He began his law enforcement career as a police officer for the Columbus Police Department.  He was a deputy for Platte County Sheriff’s Office and Polk County Sheriff’s Office prior to moving to David City, NE in 1984.  He was the Chief of Police for the  David City Police Department  for 26 years. He moved to Wilber, NE in 2010 to become the Police Chief for the Wilber Police Department.   He most recently served as a deputy sheriff for the Saline County Sheriff’s office until his death.   Steve led his officers with great composure and gentleness.  Of all the official law enforcement duties an officer can do, his two favorites were going into the elementary schools to visit with children and caring for stray dogs and cats.  To his wife’s dismay and his children’s delight, many of these animals became family pets.

Steve will be remembered for his involvement in many important groups within the law enforcement community.  He was a member of the Police Chief’s Association of Nebraska and Nebraska Crime Stoppers Association since 1988.  He was the Rural Apprehension Program (RAP) drug task force coordinator for several years .  He was a member of the David City Volunteer Fire Department for 12 years.

He was preceded in death by his parents William and Frances Sunday.