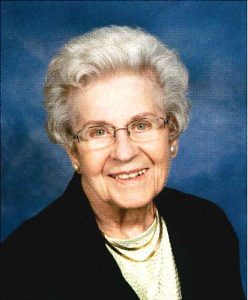 Visitation continues Wednesday 8:30-10 at the Chapel

Lunch in the church hall

Memorials in care of the family for future designation in care of:

Val was born May 10, 1930, in Osceola, Nebraska to Joe and Monica (Fuchs) Schott.  After graduating from high school, she attended Creighton University where she met John F. Theisen.  They were married on August 16, 1952, at St. Vincent's Catholic Church in Osceola.  She and Doc moved to Schuyler where he practiced Dentistry and they raised their family.  Val was an active member of St. Augustine's Catholic Church serving as a lector, EMHC, and the Little Flower Altar Society.  She also volunteered at the St. Benedict Center, Schuyler Hospital Auxiliary and was a member of the Schuyler Golf Club.  In her spare time she enjoyed playing bridge and loved time spent with her children and grandchildren.  Doc died in 2009 and Val moved to Omaha in 2012, to be closer to family.