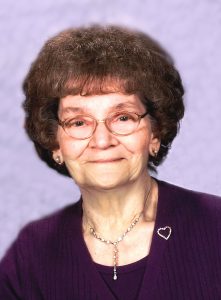 Committal in the Schuyler Cemetery  Lunch in church hall

Libbie was born May 19, 1924, on the home place north of Leigh, to James and Anna (Kyncl) Stepan.  She attended country schools near Leigh.   While working at the Top Notch Cafe in Schuyler, Libbie met the love of her life, Milo Mastny.  On September 23, 1948, they were united in marriage at Zion Presbyterian Church in Clarkson. They were married for 64 years when Milo died in 2012.  They lived and farmed near Schuyler until retiring in 1986.  They were honored in 2004 for the farm being in the family for 100 years.  Libbie was a homemaker and full time housewife.  She loved to cook and bake and was noted for her "fresh" bakery at harvest time and her famous "ranger cookies".  She and Milo loved to dance and followed the Bob Blecka Band wherever they played.  Libbie was a charter  member of the Schuyler Hospital auxiliary and belonged to the Together Club, Presbyterian Friendship Circle and the VFW Auxiliary since 1949.  She was a 70  year member of the First Presbyterian Church.