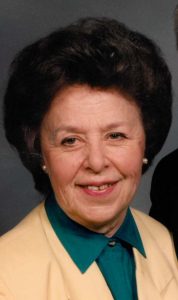 Memorials to the church or Schuyler Cemetery

Shirley Ann Stutheit Krejci was born September 29, 1932, at the farm home of her parents, Walter and Ann (Steinkuhler) Stutheit.  She was baptized and confirmed at St. Pauls’s Lutheran Church of rural Johnson county.  She attended District # 67 and graduated from Cook High School.  She then attended Nebraska State Teachers College at Peru and taught school for two years in Superior, Nebraska City and Lincoln.  On July 26, 1959, she married Allan Krejci and they moved to the family farm northeast of Schuyler.  Twin sons Scott and Stuart were born in 1960 and daughter Ann arrived in 1962.  Allan and Shirley retired to Schuyler in 1988.  She was a member of the First Presbyterian Church where she sang with the choir, taught Sunday School, served as Librarian and belonged to the Presbyterian Women.  Shirley also belonged to the Grandview Extension Club, PEO and the Friday night Supper Club.  She enjoyed baking pecan rolls and pies,  yard work and gardening, reading books and poetry and attending musical programs.