Dorothy Krejci, 83, of Lincoln, formerly of Schuyler, died Monday, September 14, 2020 at her home in Lincoln surrounded by her family. 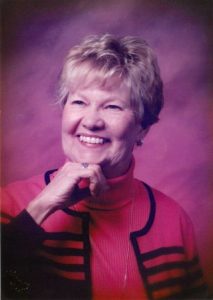 Dorothy was born February 14, 1937, in Schuyler to Earl and Gladys (Mentzer) Trofholz.  She attended Schuyler schools and graduated from Schuyler High in 1954.  She loved her school days and was very active in her class.  Following graduation, Dorothy moved to Lincoln and was employed by firms in the insurance industry.  This is where she met Ron Krejci, also from Schuyler but three years older.  They were united in marriage on March 25, 1956, in Schuyler and enjoyed a very active life.  Ron received an Army Commission and served tours in Texas and Germany, with Dorothy at his side.  On their return to the states they lived in Neligh, Schuyler and Lincoln.  Ron had ownership in the First State bank of Hickman and Dorothy owned and operated an insurance agency in the bank building for 10 years, eventually selling the business to the bank.  She was a wonderful wife and mother, adjusting to each move with grace and contentment.  She was involved in the PEO, taught Sunday School and was a Girl Scout Leader.  She was also a masterful bridge and gin player.  Dorothy had a love of people and was always ready to make new friends and welcome them into her life.  Her faith and grace involved her in church affiliations and above all, bible studies with other believers.