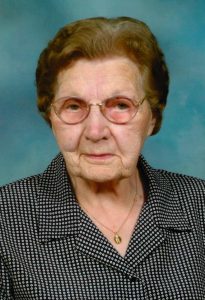 Margaret was born November 19, 1912, in Dodge to Bernard and Elizabeth (Sellhorst) Wisnieski.  She attended area schools.  On March 26, 1940, she married Joseph L. Pekarek at St. Joseph's Catholic Church in Dodge.  They lived and farmed near Howells and moved to Schuyler in 1969.  Margaret worked at the Schuyler Nursing Home for over 20 years.  She enjoyed many card clubs, sewing, gardening and belonged to the Neighborly Extension Club.  For 29 years she was a member of St. John's Catholic Church and Ladies Guild in Howells.  She was currently a member of St. Mary's Catholic Church and the Women of Divine Mercy Parish in Schuyler.

Margaret is survived by a sister-in-law, Edna Wisnieski of Lincoln and many nieces and nephews.  She was preceded in death by her husband, two sisters; Elizabeth Dvorak and Angie Vrba and five brothers; Anton, Bernard, Joseph, Albert and Hubert Wisnieski.