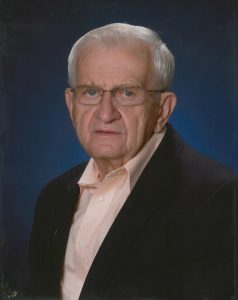 Memorials to the church or the family for future designation

Virgil Vaclav Vrbka was born on November 19, 1934 in Brainard, Nebraska to Vaclav and Rose (Samek) Vrbka. He grew up on the family farm and graduated from Brainard High School in 1953. Some of his favorite memories were of playing on the basketball team, and he was proud to play in the state tournament.

On August 11, 1956, Virgil married Maxine Klein at St. Mary’s Church in David City. They lived and worked in Omaha for a short time, and then Virgil spent two years serving in the Army. He was stationed in Germany, and he and Maxine enjoyed the opportunity to explore Germany and visit its neighboring countries. After his time in the Army, Virgil and Maxine settled in David City and had two children, Susan and Scott.

Virgil worked at Sack Lumber, Douglas and Lomason in Columbus, and at the Par IV as restaurant manager and golf course superintendent. He was very active in his community. He was a long time member of the David City Jaycees. He was the announcer for the David City Stock Car Races for sixteen years. Virgil was a 4-H leader and coached baseball and girls’ basketball. He served on the Butler County Fair Board for ten years. A gifted gardener, Virgil was the superintendent of the Open Class Garden and Field Crops for the Butler County Fair for twenty-five years. He took great pride in his display of the entries in the round building at the fairgrounds. Virgil served on the Senior Center Board, and was on the Sunshine Court Board for fifteen years, serving as President for many of those years. He was a member of St. Mary’s Catholic Church.

His hobbies included gardening, cooking, and playing cards. He very much enjoyed visiting with people and treasured time spent with family. Virgil will be remembered for his generous and fun-loving spirit.

He is preceded in death by his wife, Maxine, in 2002; his parents; his sister Marquita Hanzl; brothers-in-law Ronald Hanzl, Jerome Kovar, and John Kosch; and sisters-in-law Sheila Vrbka, Irene Vrbka, and Jean Kosch.