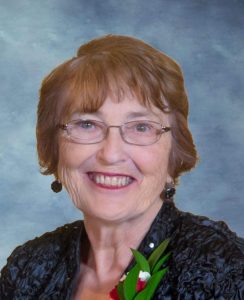 Anita was born February 12, 1941, in Dodge, Nebraska to Joseph and Gertrude (Stalp) Maresh.  She graduated from Dodge High School and attended Wayne State Teacher's College.  She lived in Omaha and worked for Mutual of Omaha.   On  April 15, 1961, she and Maurice Flynn were married in at St. Wenceslaus Catholic Church in Dodge.  They had a "true love affair" for 58 years.  While raising her six children, Anita was very active in her church and community.  She was a member of St. Augustine's Catholic Church, taught CCD, sang in the choir and was a leader of the Rosary.  She also belonged to the American Legion Auxiliary, the Red Hats, PEO., PTA  and Extension Club and the Schuyler Memorial Hospital Auxiliary.  She worked at the Benedictine Mission House, taught ESL classes and worked in Special Ed at the High School.  Anita was also a poll worker and volunteered for Blood Drives.  She enjoyed water aerobics, attending all activities of her children and grandchildren and spending time with her numerous friends. Her friends and family will miss her smile and fun-loving spirit.