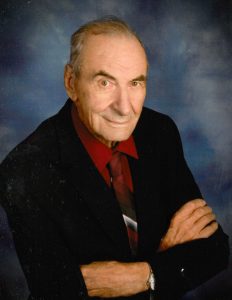 Lunch in the Church fellowship hall following the committal

Frank J. Vrba was born April 10, 1927 at Schuyler, Nebraska to Frank W. and Anna (Abraham) Vrba.  He attended area schools and graduated from Schuyler High School in 1944.  April 5, 1951 Frank was united in marriage to Ann Marie Krejci at the First Presbyterian Church in Schuyler.  Three children were born to this union.  Frank was a lifelong farmer north of Schuyler.  He enjoyed fishing in Minnesota, traveling to Hawaii and Las Vegas, and always enjoyed taking the "back roads" when traveling.  Frank was an avid dancer and enjoyed going to many dances.   He was a member of the First Presbyterian Church in Schuyler, Western Fraternal Organization, Schuyler Eagles Club and also served in the U. S. Army Reserves.