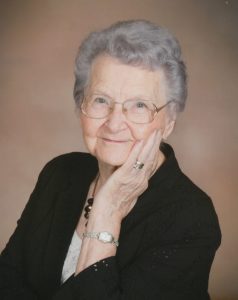 Olga M. Shorney Lehr was born January 16, 1922 at David City, Nebraska to Edward and Anna (Hlavac) Yindrick.  She attended school at Brainard and Dwight.   Olga was united in marriage to James P. Shorney at St. Mary's Catholic Church in David City in October of 1940.  Four children were born to this union.  James and Olga farmed near Abie until 1953 when they moved to Garrison.   James died May 12, 1955.  Olga moved to David City in 1962 and later married Harvey Lehr at St. Francis Catholic Church, Center.  Olga and Harvey later moved to David City in 1980.  Harvey died in January of 1990.  Olga worked several jobs in the David City area including office work at the gas company, waitress, B.J.'s Hardware and also volunteered at Aquinas.   She enjoyed gardening and especially quilting, often being referred to as the "Quilt Lady", which was on her license plates.   She was a member of St. Mary's Catholic Church, the PCCW and St. Mary's Guild.