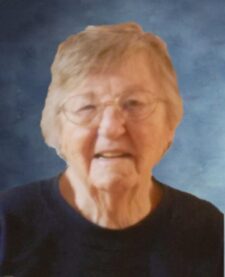 Leona Marie (Odvody) Prochaska was born April 8, 1930 on the family farm near Prague, Nebraska, to Emil and Frances (Bushek) Odvody.  She attended country school at Dist. 51 near Prague.   Leona married Adolph Placek on October 21, 1947 at Wahoo, Nebraska.   A son Adolph Joe was born to this union.  After Adolph passed away, she later married Edward Prochaska on November 30, 1963 in Wahoo, and a son Clifford was born to this union.  Leona was a homemaker, and also worked as a waitress at Harbin's  and Clayton's bar in Prague.  She was a hard worker and often milked cows and butchered chickens on the farm with the kids the old fashioned way.   She also enjoyed canning and baking Kolaches and rye bread and gardening.    Leona also like to do word search puzzles.  Some of her favorite things to do was to attend the Friday night fish fry's, play bingo and loved to listen to the All Star Polka Show.   She also went on many bus tours with Mark Vyhlidal.   She was a member of the ZCBJ Women's Auxiliary of Prague.