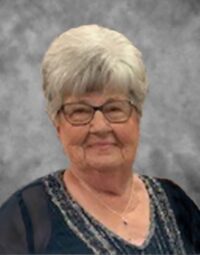 Memorials to the Schuyler Cemetery

Marlene was born July 4, 1937, in Schuyler, to Edward and Dorothy (Steppat) Posvar.  She attended school in Butler County and graduated from Linwood High School.  In High School she worked in the telephone office in Schuyler.  On August 20, 1955, she married Adrain Zima at St. John's Lutheran Church in Schuyler.  Married for 59 years, they lived in Denver for a short time and returned to Linwood where they farmed until 2004, when they moved to Schuyler.  Marlene helped on the farm and later worked at Jack and Jill and Didiers Grocery Stores in Schuyler.  She belonged to the Linwood Extension Club and was a lifelong member of St. John's Lutheran Church in Schuyler.  Her family fondly remembers her "dessert making" magic, especially four layer cake, peach pie and her famous cream cheese brownies.  Marlene was an avid HUSKER fan and she and Adrian loved polka dancing and an occasional jitterbug.