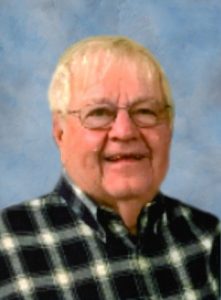 Kracl Chapel does not sell flowers and is not connected with any of the  national flower delivery companies.  At the end of the obituary you will find information for the florist the family used and suggest for best service and delivery, you buy local.

Parish and Knights of Columbus Rosary 7:00 p.m., all at Kracl Funeral Chapel

In Lieu of flowers, plants and statues, family suggests Memorials for future designation

Allen was born December 8, 1941, in Columbus, Nebraska to Leonard and Rose (Horejsi) Horejsi.  He attended area schools and graduated from Schuyler High School.  On May 4, 1963, he married Bonita Donovan at St. Mary's Catholic Church in Schuyler.  They farmed northwest of Schuyler until 1985 when they moved to town. He was a member of the NATPA(tractor pulls) and was an avid participant and announcer at many tractor pulls. He pulled with a Minneapolis Moline UB named “UB sorry”. Allen was a truck driver and over the years worked for Husker Coop, Hanover and Behlens.  He also served on the Platte Valley Drainage District.  He was very handy, building the cabin near Rogers and setting up the "place" south of Schuyler.  The land where he died was in the family for 100 years.  Allen loved hunting, fishing and spending time with the family.

Allen is survived by his wife, Bonita, two sons; Mark and Michele Root, Craig (Michelle) Horejsi, all of Schuyler, one brother, Rainold (Patricia) Horejsi, Schuyler, six grandchildren;Cole, Kyle, Brooke, Justin, Dylan and Logan Horejsi, and two nieces; Lynnette (Dale) Nelson of Malcolm and Jan (Alan) Keller of Seward.  He was preceded in death by his parents and in laws, Glen and Helen Donovan.