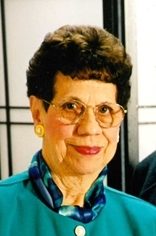 Committal in the Leigh Cemetery immediately following the Service

Adella was born December 30, 1925, near Richland, Nebraska to Joseph and Jenny (Dietrich) Fendrick.  She attended area schools. On April 24, 1949, she married Raymond Fuhr at the Congregational Church in Leigh.  They lived and farmed northwest of Leigh.  Ray died in 2015.  Adella was a proud member of New Zion Presbyterian Church in Clarkson and was known for her excellent strudel and dumplings.