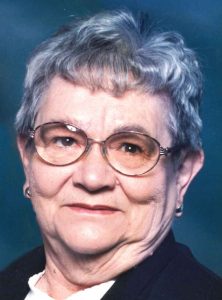 Evelyn was born January 18, 1931, in David City to Gene and Eloine (Bock) From.  She graduated from David City High School and on April 5, 1949, she married Norval Hoeft in Wahoo.  They lived in David City where they raised their family.  Evelyn worked in the restaurant business including Kozy Lunch, the Hotel and the Donut Shop in David City.  She especially loved following all activities of her children and grandchildren.  She also enjoyed playing cards and taking care of her flower garden. Evelyn was a member of Redeemer Lutheran Church.