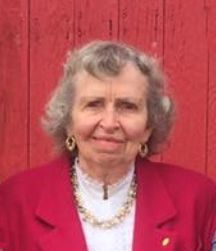 Committal in the Schuyler Cemetery    Lunch in church hall

Memorials to the church or the Schuyler Library

Eunice I. Marxsen was born October 26, 1928, in Johnson, Nebraska to Leonard and Blanche (Mort) Seckman.  While in High School she took Normal Training which allowed her to teach following graduation.  On February 27, 1949, she married Leland F. Marxsen at Christ United Methodist Church in Schuyler. After a few moves, they lived near Rogers and in the 60's, built and operated the skating rink, where the Casey's store is now located.  Eunice was active in ENCORE, working at the Industrial Training Site in Fremont with the handicapped, which she thoroughly loved and of which she was very proud. Eunice was a member of the church, ladies group at the church, the Schuyler Civic Club and Schuyler Historical Society.  She loved music and played the piano by ear.  She sang in the church choir and enjoyed crocheting, sewing, gardening and playing bridge.