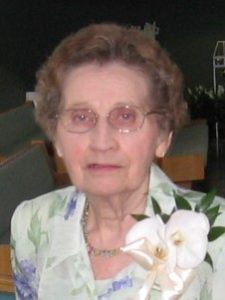 Wilma Victoria Votruba was born August 21, 1927, in Colfax County to Joseph A. and Marie (Kadlec) Vrba.  She attended Langley School District #34 in Colfax County from 1st through 10th grade and completed her education graduating from Schuyler High School in 1943.  Following graduation Wilma worked on the family farm until 1948.  On April 10, 1948, she married Loran Votruba at SS Cyril and Methodius Catholic Church in Clarkson.