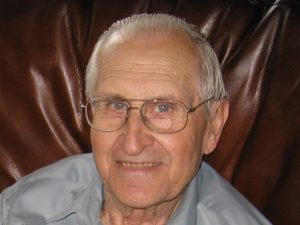 Memorials: in care of the family

Loran Leo Votruba was born to Frank O and Lizzie Votruba on a farm in Dodge County Nebraska February 20, 1926.

Growing up Loran lived on a farm by Dodge and attended school in Dodge, NE.

At age 17 he joined the Army 3461st Ordinance Medium Automotive Maintenance Company.  Loran served during WWII from February 21, 1945 to November 26, 1946.  He was part of the first occupying force in Japan.

Upon returning from the service he started farming by Dodge, NE.

Loran is a life time member of the Veterans of Foreign Wars.

Loran is survived by:

He was preceded in death by: Wife Wilma V Votruba

parents in law Joseph A and Marie Vrba

brothers and sisters in law: Adolph and Ludmilla Stecher,  Jerry  and Jennie Stecher, Raymond and Doris Stecher, and Frank Votruba,

Kracl Funeral Chapel of Schuyler in Charge of arrangements