Donald Jedlicka, 89, of Schuyler, died Monday, February 12, 2018, at the Schuyler Care and Rehabilitation Center in Schuyler. 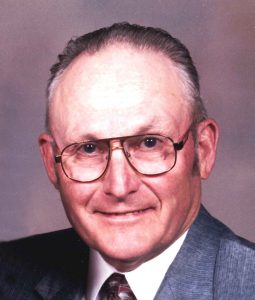 Lunch at the Eagle's Club in Schuyler

Memorials to the Victory Fellowship Church

Donald Frank Jedlicka was born on March 1, 1928 to Frank J. and Agnes (Maliha) Jedlicka. He graduated from Schuyler High School in 1946. He attended Midland College, Fremont and served in the US Army before returning to the family farm.

Donald was a member of the Victory Christian Fellowship Church, Columbus. He was a Charter Member of the Colfax County ARC and held many offices, served as a committee member of Colfax County ASC and was a lifetime member of the Knights of Columbus. Donald farmed all his life, raising sheep and hogs. He owned and operated Don’s Feed Service for many years, he used the slogan “drive a mile, save a pile”. He Loved the outdoors, camping, fishing, hunting, working in his shop and playing cards. He was a very caring person, always willing to help others

He was preceded in death by his parents, wife Corabelle in October 2017, daughter Gail and stepson Dennis Emmons.