Blain Larson, 64, of Schuyler, died Sunday, February 19, 2017, at the Nebraska Medical Center in Omaha, surrounded by loved ones. 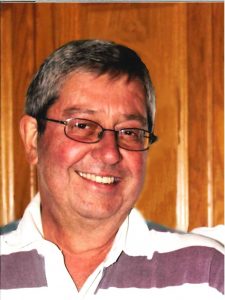 Visitation Wednesday 4-7 P.M. with 7 P.M. Rosary at the funeral chapel

Thursday morning 9-10A.M. at the church

In lieu of flowers memorials may be given to St. Jude's Children Hospital

Committal at 3:30 P.M. at St. Wenceslaus Cemetery in Verdigree

Blain Leon Larson was born September 20th 1953 in Yankton South Dakota to Virgil and Denelda Bruns Larson. He enjoyed life on the farm at Verdigre, belonging to 4-H, enjoying his animal projects and attending Sparta Country school.The family moved to Plattsmouth when Blain entered 9th grade and he enjoyed his high school years there forming new friendships, several which lasted the rest of his life, graduating in 1971.Blain entered UNL in fall 1971 and then graduating from UNMC in 1977 with his Bachelor’s Degree in Pharmacy.

Blain was united in marriage to Patricia Nolles in 1976 at Holy Cross Catholic Church, Bassett. They were proud parents of Amber Leigh in 1978, Trent Michael 1980 (Dec. 1980) Matthew Blain in 1982. Blain and Pat purchased Christensen Drug – later Larson Pharmacy, in 1986 and the family lived in Hebron for many years.

They divorced in 2001 and in  2004 Blain moved to Schuyler, NE and later purchased Schuyler Pharmacy. He continued to love the outdoors enjoying gardening and spending time at Lake Socorro.

He was preceded in death by his son Trent Michael, his father Virgil Larson and grandparents Conrad & Anna Larson, and Anton & Marie Bruns.