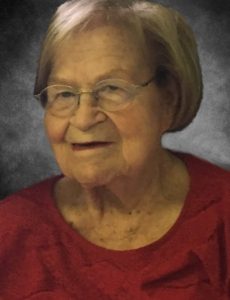 Visitation 9-10 AM with 10 AM Rosary Service Wed.  at the church

Committal in the Schuyler Cemetery     Lunch in Church social hall

Stephanie Kasik Jedlicka was born April 29, 1930, in Leigh, Nebraska to James and Stephanie (Hauk) Kasik.  She attended Leigh Schools and graduated from Leigh High School.  On August 25, 1953, she married Donald F. Jedlicka at St. Mary's Catholic Church in Leigh. They later divorced.  Stephanie spent the last 25 years of her life at the Community Pride Care Center in Battle Creek and the family is very appreciative of the wonderful compassion and care given her.  Stephanie loved art, music(especially jazz) and horses, instilling in her daughters a love for those hobbies.  Linda remembers being taught to drive, up and down the farm lane, because girls had to know how to drive and Stephanie made sure they did.