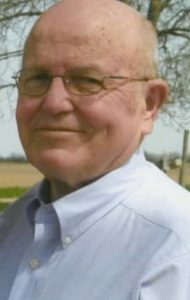 Visitation Wednesday 5-7 and Thursday 10-11 at the chapel

Committal at 2:00 P.M. in the Circle Mound Cemetery, Rising City

Curtis was born May 22, 1941, in Shelby, Nebraska to Bernard and Estella (Stryker) Burgess.  He graduated from Rising City High School in 1959 and attended the University of Nebraska in Lincoln. Following his senior year in high school, he was among the members of the FFA chosen for a Goodwill trip to Poland, Russia and other countries.  During his college years he also "secretly"  obtained his pilots license without his parents knowledge. On May 25, 1963, he married Bobbie Shunk at the Methodist Church in Rising City.  He farmed near Rising City until 1986 and then worked for Tenneco Automotive in Seward for 25 years.  They moved to David City in 1990.  Curtis was past President of the Nebraska Soybean Association and past President of the Nebraska Pinto Horse Association.  He was a member of the Methodist Church in Rising City for many years.