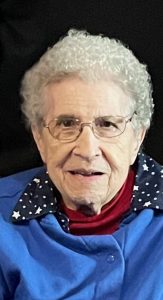 Visitation Tuesday 5-7 with 7 P.M. Rosary at the church

Visitation Wednesday one hour prior to Mass

Committal in the church cemetery  Lunch following at the church

Lorie was born May 25, 1929, in Humphrey, Nebraska to John and Johanna (Fugger) Hollatz.  She attended school in Humphrey and graduated from Humphrey St. Francis High School.  On September 13, 1955, she married Richard Reichmuth at St. Francis Catholic Church in Humphrey.  They lived and farmed near Leigh.  Lorie enjoyed quilting, gardening and baking bread.  The family had a tradition of supplying cat tails to the fair each year, and it continues to this day.  She also sold fireworks and raffle tickets for the summer recreation program and lined up the Color Guard for the annual fast pitch softball tournament.  Lorie was a member of the church and the Altar Society.