Masks will be required at visitation and service 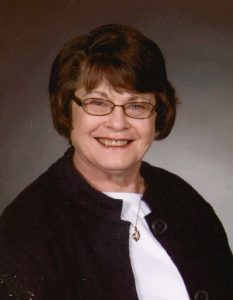 Committal at 2:00 P.M. in the Fairbury Cemetery

Memorials to the church or Schuyler Library

Maxine Jean McVay was born in Omaha on Dec. 6, 1941, one day before Pearl Harbor, to Jeanette (Fosnot) and Edward McVay. They lived in Ulysses, then moved to Gothenburg where she spent her childhood, joined by younger brother Mike in 1950.

Micki graduated from Gothenburg High School in 1959, then from the University of Nebraska-Lincoln in 1963 with a degree in speech and hearing therapy. During college she was a member of Chi Omega sorority and represented Gothenburg and Dawson County as an Ak-Sar-Ben countess. She was also proud to work at the Pony Express Station museum in Gothenburg for two summers during college.

Micki married David Roberts on August 29, 1964, after meeting on a blind date on New Year’s Eve. They enjoyed their years living with friends in Huskerville while Dave completed dental college and she taught in Omaha and Lincoln. They then moved to Minden, where their daughter Rebecca Jean was born in 1967 and son Matthew David in 1970. In 1976 the family moved to Lexington.

When her children were old enough to attend school, Micki returned to the field of education and for many years enjoyed her work as a speech pathologist, first in Gothenburg and surrounding towns from 1976-1988, and later in the Omaha area where she especially loved her special education kindergarten class in Louisville.

Micki and Dave briefly moved to Omaha in 1989, then to Schuyler in 1992 where they enjoyed 27 years of good friendships especially with their “Friday night group.” She retired in December 2001 after 31 years of teaching and then enjoyed several years as a Head Start volunteer. She was a longtime member of First Presbyterian Church in Schuyler. She and Dave sang together in the church choir and were involved in many church activities.  Since 2019 Micki has lived in Lincoln, near her children and grandchildren.

Micki was initiated into PEO by her mother in 1961 and received her 50-year pin in 2011. She also was a member of Order of the Eastern Star. She was a talented quilter and a longtime crafter in multiple media, from needlepoint to cross-stitch to cardmaking. Another love was reading, particularly her James Patterson mysteries.

Survivors include her son and daughter-in-law, Matt and Paige Roberts of Lincoln; daughter Becki Roberts and partner Jeff Smith of Lincoln; grandchildren, Emerson, Charles, and Ryan; her brother, Mike (Terry) of Gothenburg; sister-in-law, Leslie (Cary) Lee of Gypsum, Texas; and many beloved nieces and nephews. She is preceded in death by her husband of 54 years, Dave; her parents, Jeanette and Edward McVay; parents-in-law, Russ and Millie Roberts; brothers-in-law, Rod and Tony Roberts; sister-in-law, Ruth Ann Roberts; and her niece, Laurie.