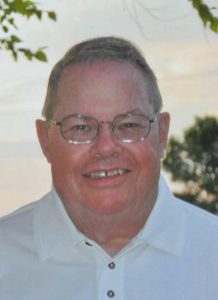 Visitation Friday, one hour before the service at the church

Edgar "Ed" Hutchinson was born May 13, 1941, in Denver, Colorado, to Howard and Maud (Church) Hutchinson.  He grew up in Lakewood, Colorado and graduated from Lakewood High School in 1959.   Ed later attended Doane College and graduated with a degree in music in 1963.   While at Doane, Ed met Sandra McGee.  They were married on August 21, 1965, in Seward, Nebraska, and two sons, Brian and Chris were born to this union.  Ed began teaching music in 1963 and taught in David City from 1966 to 1979. During this time, Ed also earned a master’s degree in music from the University of Nebraska.  He sold insurance from 1979 to 1981.  From 1981 to 1997, he and Sandy owned and operated the Donut Shop-Cafe in David City.  He later sold jewelry at J.C. Penney in Lincoln from 1997 till retiring in 2014.  Ed had joked that he went from selling "donuts to diamonds".   He was a member of St. Luke's United Methodist Church in David City, a Boy Scout leader, and a Butler County Historical Society board member.