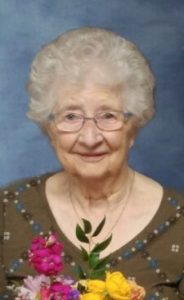 Meg was born September 13, 1931, on a farm near Rescue, Nebraska to Anton and Barbara (Roubal) Brecka.  She attended area schools and graduated from Prague High School in 1949.  She met Alvern at a dance in Abie and they had dated for five years. They were married April 25, 1950, she was 18 and he was 24 years old. She enjoyed sewing for others since the age of 13.  They lived in Rescue for awhile after their marriage and farmed from1950-1964, when they moved to David City.  Meg worked as a waitress at Northside for 6 years, the Hospital for 17 years, 11 years at the David City Schools as a cook and Brecka Motor parts as a bookkeeper for 15 years.  She was a huge Husker fan of football and volleyball and loved attending all the activities of her grandchildren.