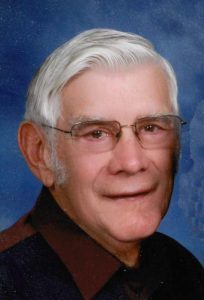 Committal with Military Honors in the Schuyler Cemetery

Dave was born August 7, 1936, in Schuyler, Nebraska to William and Helen (Dvorak) Yosten.  He graduated from Clarkson High School and served in the United States Navy.  On June 5, 1958, he married Norma Novak at Sts. Cyril and Methodius Catholic Church in Clarkson.  They lived and farmed near Clarkson and moved to Schuyler in 1990.  Dave was a member of St. Mary's Catholic Church, the Catholic Workmen and had served on the board of Schuyler Hospital.  He loved all sports and attended all activities of his children and grandchildren.  Dave loved traveling with Norma but always loved returning to the farm, which  was his calling.