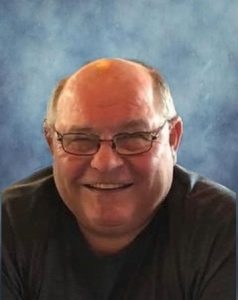 Visitation Wednesday 4-7 P.M. with 7 P.M. Rosary at the church

Dinner immediately following the Mass, in the church hall

Memorials to the Bellwood Fire Department or Family Wishes

On September 21, 1985, Robert married Mary Beth Romshek at St. Peter’s Catholic Church in Bellwood where he lived for the rest of his life. Two sons, Vincent and Eric, were born to this marriage. Besides raising their family, Robert and his wife were part owners of T & K Pitstop for several years.

Robert was active in his community serving on the city council and was a member of St. Peter’s Church. His hobbies included hunting, fishing, NASCAR racing, and Husker athletics. Robert will be remembered as a good father, good friend, and for his ornery personality.

He was preceded in death by his father and mother Robert and Bev; children Bryan and Tammy; brother Scott and wife Debbie; and father-in-law Joseph Romshek.