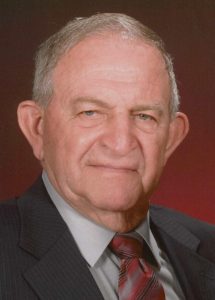 Committal in St. Mary's Cemetery  Memorials in care of the family

Richard J. Rerucha was born April 4,1936 to Leonard and Georgia (Bartunek) Rerucha.  He was the second of seven children in the family. He grew up on the family farm South of David City, Nebraska where his love for the outdoors, livestock and farming were cultivated. He graduated from Marietta High School near Bellwood, Nebraska in 1953.  He helped his dad, Leonard, with his farming operation and completed a diesel course with the International Technical Institute of Chicago.  He continued helping his dad on the farm and with his seed corn dealership which they continued for 60+ years.  During the winter months, he worked for Schuyler Propane in appliance repair and sales.  Basketball and football officiating came into the picture during this time.  He spent many years running up and down the court and field with Joe Kopecky for many of the games.

He met Virginia Nichols on December 8, 1954 when he gave Virginia and a friend a ride home from St. Mary’s Church. The two were united in marriage on July 26, 1958. They moved to Atkinson in 1959. He served as a member of the Nebraska Air National Guard from 1958-1964 where his duties included armament and loading rockets on jet planes and traveling to Texas, Washington, DC., Wisconsin and Kansas.

The first of their four children, a son, Robert, was born in Atkinson.  They decided to move back to Butler County in December of 1961 where he worked in the propane business.  They purchased a farm east of David City in 1962 where they farmed and raised livestock.  Three more children were born while they lived on the farm, Nancy, Steven and Joan.

He coached the St. Mary’s Knights Junior High Basketball team from 1973-1984.  He loved basketball so much and made the yearly pilgrimage to Lincoln to watch as many boys state basketball games as he could before his health declined.

Rich loved to fish and could be found outside tinkering with his farming equipment, casting a lure into a pond, and playing with his chocolate Labrador dogs nearly every day of his life.  He loved to take fishing trips with his “fishing buddies” and loved to travel with Virginia and his kids.

Rich was a man with many talents, besides working God’s soil, he could be found in his shop working on wooden items, making fishing lures, and welding.  He served on the Butler County Fair Board for twelve years, the Butler County Public Power District Board for six years and was a life-long member of the Knights of Columbus.

He enjoyed watching his children and grandchildren in their various activities, be it on the baseball diamond, basketball court, wrestling mat, or show arena.

He was preceded in death by great grandson Jack, son Robert, step-grandson Michael brothers Lynos and Adrian, and his parents.