Libbie Mastny, 92, of Schuyler, died Sunday, May 16, 2021, at the Clarkson Community Care Center in  Clarkson 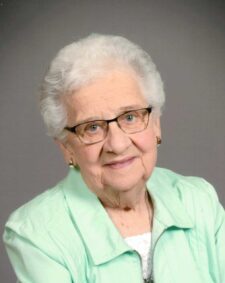 Committal in the church Cemetery, lunch following in church basement

Memorials to the Heun Cemetery Fund

Libbie Ann was born March 26, 1929, in the Heun Community of Colfax County to James and Anna (Mosansky) Cech.  She received her education at District #47, Colfax County.  On September 10, 1947, she married Rynold R. Mastny at Holy Trinity of Heun.  They farmed in the Clarkson/Heun area.  After her family was grown, Libbie worked at the Parkview Nursing Home in Dodge, in  the dietary department for many years before retiring to Schuyler in 1992.  She was a lifelong member of the church, altar society, Ladies Guild, church choir, parish council and the Happy Homemakers Extension Club.  Libbie also served on the Election Board, Schuyler Hospital auxiliary, Senior Center Board and belonged to several card clubs   She enjoyed music, playing cards, bingo, traveling and most of all, her family, attending all sports and school  events  of her children, grandchildren and great-grandchildren.

She is survived by her two children; Brian (Joan) Mastny of Clarkson, Denise Miller of Omaha, four grandchildren; Matt (Cheri) Mastny and their children Charli, Graeme and Briggs, Justin (Christi) Mastny and their children, Aiden, Harper, Lynkin and Marcus, Trent Mastny and his fiance Nevada Smith and Stephanie Miller (Ryan) Loneman.  She was preceded in death by her husband, Rynie(12-29-93), her parents, sister Julia Sobota, brother James Cech and son-in-law Ray Miller.