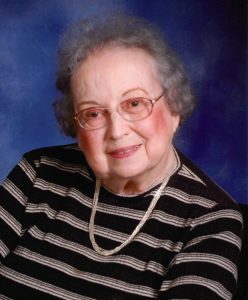 Memorials, in  lieu of  flowers, to the Humane Society

A Memorial Service will be held later this spring

Marilyn Margaret (Brockelsby) VanArsdel was born in Columbus, Nebraska on March 20, 1930 to Clarence and Elsie (Robey) Brockelsby. She grew up in Richland, Nebraska and loved the small town. Marilyn graduated from Kramer High School in May of 1948. She worked at Hockenberger Bank and Trust, Columbus, Nebraska, until her marriage to Richard VanArsdel in April of 1959. They lived in Topeka, Kansas where their daughter, Dori was born. Later, they divorced and Marilyn and Dori moved to Richland to live with her parents. Marilyn worked as a secretary for Behlen Manufacturing and was active in the Richland Ladies Aid. She enjoyed leading the Richland Lassies 4-H club along with the camaraderie with the other ladies and the young girls. Marilyn loved baking and decorating cakes for friends and family. Every Christmas she would deliver banana bread to all of her neighbors. She enjoyed attending Dori’s sporting events and never missed any. After retirement, she was able to travel with her friends and especially enjoyed Colorado, Arizona and Nevada.

Marilyn was preceded in death by her parents