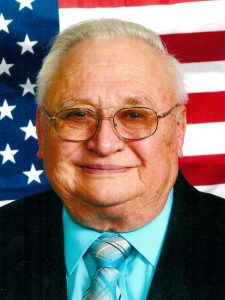 PLEASE NOTE SERVICE TIME HAS BEEN CHANGED TO 11:00 A.M.

Masks will be required at Church

Visitation one hour before service at the church

Memorials: to the family for future designation’

“Shorty” was born November 3, 1930 on the farm near Malmo, Nebraska to Adolph and Helen (Placek) Novak.  He attended grade school at dist #92 north of Prague and graduated from Prague High School in May of 1948.  Francis served in the United States Air Force from September 18, 1951 until he was honorably discharged with the rank of Staff Sergeant  on September 17, 1955.  While serving he was awarded the UN Service Medal, Korean Service Medal, Defense Service Medal and the Good Conduct Medal.  He has served in the Mojave Desert, overseas in southern Japan and southern Korea, and completed his service at Forbes Air Force Base in Topeka, Kansas.  Following his military service he worked at the Nebraska State Penitentiary as an administrative clerk.  In April of 1956 “Shorty” began working at the Bank of Brainard as a teller and bookkeeper.  He worked at the bank for many years retiring in April of 1996 after serving in many capacities including President and Senior Investment officer.  He had remained on the Bank Board of Directors as Vice Chairman until October 1, 2002.  He was very active in the Brainard community.  “Shorty” served on the Brainard Volunteer Fire Department for 18 years serving as treasurer, secretary and president.  He also served on the Brainard Village board for 11 years.  He was a permanent member of the Brainard American Legion where he held offices.  Francis was of member of the Prague Presbyterian Church for 82 years until its closing in 2012, at which time he transferred his membership to the First Presbyterian Church in Wahoo.  “Shorty” received many distinguished awards from various organizations in Brainard for his years of dedicated service to the Brainard Community.

“Shorty” is survived by his sisters, Leona (Lyle) Torrens of Wahoo, Darlene (Dean) McVicker of Bellevue.  Many nieces and nephews.  He was preceded in death by his parents and brother Dennis.