Mass will be livestreamed on Kracl Funeral Chapel Facebook 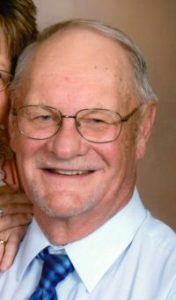 In lieu of flowers the family requests memorials in Ron's honor

Ronald Douglas Shipley was born in Seward, Nebraska August 18, 1943, to Leonard and Rose (Korinek) Shipley.  He attended country school in  Seward County,  Ulysses school and graduated with honors from David City High School in 1961 and attended  Kearney State College for one year.  He was a member of St. Mary’s Catholic church in David City.  Ron served in the Army National Guard for ten years ,worked at Hughes Brothers, Inc. for 43 years as a machinist and was shop Steward of International Association of Machinist and Aerospace Workers Union, Lodge 1569.  Ron was a proud member of American Legion Post #125.  In 1987, Ron  married Brenda Ewert, the love of his life.  He enjoyed travelling with his wife and friends and an occasional trip to the casino.  He also enjoyed dirt track racing, watching his hometown favorites,  but his family was his greatest love. He loved time with the grandchildren, great-grandchildren, nieces and nephews.