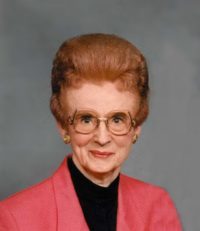 GRAVESIDE SERVICE WILL BE LIVE STREAMED

Marcella was born September 12, 1927, in Schuyler, to Elmore and Mayme (Vanicek) Kunkle.  She graduated from Schuyler High School. On December 14, 1958, she married Richard Johannes at the First Presbyterian Church in Schuyler, where she was a life member.  They lived  in Schuyler and Marcella worked as a receptionist for Reinecke Motors for over 50 years.

Marcella is survived by niece Deb Lambrecht of Lincoln, cousins  LeRoy (Kathy) Vanicek and Geraldine Hladky as well as her caregiver Lisa Westerbuhr.  She was preceded  in death by her parents, husband Richard in 2006 and sister Donna Kunkle in 2019 and in-laws, Jim and Dorothy Lambrecht.