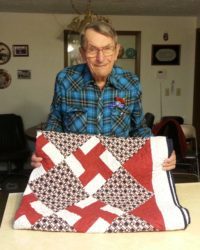 Jerome was born on the home place in Brainard on June 17, 1930, the son of Joe and Mary (Pelan) Slama.  He attended area schools until old enough to help on the farm and was a farmer his entire life.  He served in the United States Army during the Korean Conflict. On May 6, 1959, he married Georgia Pokorny at Appleton Catholic Church.  They lived and farmed near Rising City where they raised their twins, Kevin and Kelly.  Jerome was strong willed and loved the hard work of farming.  He taught himself how to play the button accordion and loved jamming with others and visiting people in their homes to share his music.

Jerome is survived by his children, Kevin (Amy) Slama of Rising City, Kelly Slama and her husband Mark Basel of Lincoln, two grandchildren, Katherine and Caroline Slama and one sister, Rita (Ed) Pospisil of Missouri.  He was preceded in death by his parents, wife Georgia in 1993, brother Norman Slama and two sisters, Dorothy Jecha and Bernice Ostry.

The family will have a private memorial service on Saturday with burial in St.Mary's Cemetery, David City, with Military Honors by Brainard Post #273.

Since Jerome and his family decided on a private, simple service, they ask you to please send some of your favorite memories in a card or letter.  Just send them to the funeral chapel at P.O. Box 55, David City, NE 68632