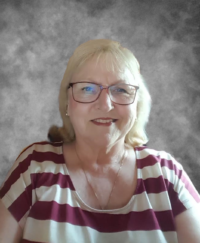 Janet was born October 5, 1949, in Grand Island, Nebraska to Ivan and Vena (Underhill) Pace.  She attended school in Grand Island and graduated from Grand Island High School.  She attended Kearney State and UNL, receiving her degree in Purchasing.  On November 29, 1975, she married Ronald McKay in Grand Island.  They spent fun-loving years moving around, living in Denver and spending weekends in the mountains.  Eventually they moved back to Nebraska to be closer to family.  Janet loved the outdoors and gardening.  Nothing was more important than family, especially enjoying all the activities of her grandchildren.  She was known to be an "outspoken" Big Red fan. Janet had served as Purchasing Manager for Timpte in David City for over 20 years.

She is survived by her two sons; Reily (Ashley) McKay of Columbus, Kyle (Angela Flowers) McKay of Lincoln, two sisters; Connie (Harlan) Sawyer and Rita Lanzendorf, all of Grand Island, grandchildren Jayden, Knoxon and Chloella McKay and Michael and Kenya Flowers.  She was preceded in death by her parents and husband Ronald in 2019.