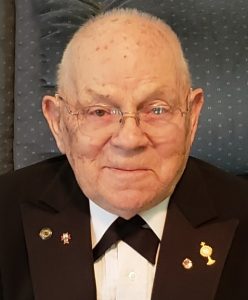 Visitation one hour before mass Monday at the church.

In Lieu of flowers, memorials to the family.

He was a member of St. Francis (Center) church in David City.  After moving to David City, he became a member of the St. Mary’s Catholic Church. He was a 4th degree knight with the Knights of Columbus.

He served in the United States army from 1953 to 1955, stationed at Sandia Base, Albuquerque, New Mexico.

Fred was united in marriage to Joan Pflughaupt on August 24, 1954 at St. Vincent DePaul, Seward, Nebraska.  They were blessed with four children.

Fred was a devoted husband, had celebrated 65 years of marriage, loved his kids and grandkids.  Loved to go to auctions and pick up the 25 cent boxes, was an engineer  of mismatch of inventions (ask his boys), he was generous with his time and had a big heart.  He was well known in this area.

Throughout his lifetime, he was a farmer for 30 plus years in the Brainard area, after that drove a propane truck in David City, retired from working for the city of David City, and then continued to do odd jobs.