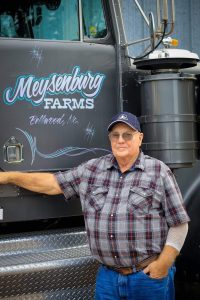 Rosary by Knights of Columbus at 5P.M. and Parish Rosary at 7 P.M.

The family has chosen B. Marie's flower shop of Osceola

Donald J. Meysenburg was born February 5, 1944, in David City, to Joseph B. and Leonarda (Vandenbroek) Meysenburg, the oldest of 10 children.   He attended school at Marietta and graduated from Aquinas.  Following graduation served in the United States Army Reserves.

On April 11, 1970, he married Carol Zoucha at St. Anthony's Catholic Church in Columbus.  They lived and farmed near Bellwood.  He was a member of Presentation Catholic Church where he served as an Acolyte and also belonged to the Knights of Columbus.  Don was a farmer.  That was his occupation, passion and hobby.  Don's family said his loves were faith, family, farming and friends.