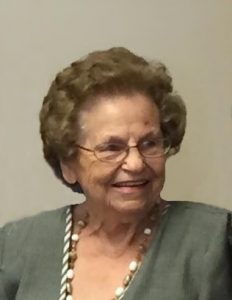 Visitation Monday 9-10 A.M. at the church

Irene was born July 18, 1926, near Bellwood, to Frank and Mary (Delahamet) Eller.  She attended area schools and graduated from Marietta High School.  On January 25, 1951, she married Donald E. Medinger at Presentation Catholic Church.  They lived and farmed the Medinger "homeplace" north of Octavia.  Irene enjoyed sewing, baking gardening and was very proud of her flowers.  She was always cooking and baking for church functions until they let her retire, at 85.  She was a member of the church and the Altar Society.  Irene especially loved time with her family, playing sheephead and dancing with Don.