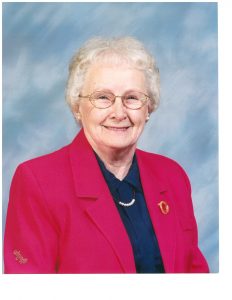 Continues Tuesday 9:30 at the church

Ceola was born September 28, 1922, near Leigh, Nebraska to Elmer and Elise (Loseke) Busse.  She attended area schools and graduated from Leigh High School in 1940.  On June 20, 1941, she married Jerry Sedlacek in Omaha.  They lived in Leigh and over the years and Ceola worked at True Value, Tri-County and for Steve's Market.  She was a member of St. John's Lutheran Church and the American Legion Auxiliary.  Ceola was the Chairman of the annual Poppy Day.

Ceola is survived by her son, Ken (Cheryl) Sedlacek of Loveland, Colorado, four grandchildren; Kristin (Spence) Sedacca, Karlin (Dave) Goggin, all of Loveland, Mark (Katie) Fuentez of Costa Mesa, California and Jeffry Fuentez, six great-grandchildren; Carter and Calvin Smith, Connor and Danika Goggin and Lena and Lauren Sedacca.  She is also survived by sister-in-law Doris Busse of Columbus and many nieces and nephews.  She was preceded in death by her parents, husband and one daughter, Carolyn Fuentez.