Charles Mullenhoff, 86, of Leigh, died Monday, June 17, 2019, at the Columbus Community Hospital, surrounded by his family. 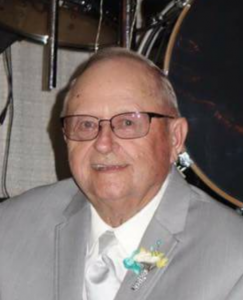 Thursday visitation 9-10 A.M. at the Church

Committal in the Zion Cemetery with Military Honors

Charles was born April 22, 1933 to Carl and Florence (Asche) Mullenhoff in Leigh.  He attended Zion grade school and graduated from Leigh High School in 1950.  He enlisted in the US Air Force in 1952 and was honorably discharged in June 1956 as staff sergeant.

On October 3, 1954, he married Carolee Selichnow in Columbus.  After his discharge they lived in Columbus and was employed at Dale Electronics as a production supervisor.  During his lifetime he was engaged in farming, owned and operated Charlie’s Feed & Supply from 1972-1974, was employed at Bank of Leigh from 1973 through 1986 and served on the Board of Directors.  He was a charter member and president of Leigh Optimist Club and a 60 year member of American Legion Post 302 where he was post commander and finance officer.  He served on Leigh Community School Board and Leigh Businessmen’s Association, and numerous other boards.  He was a lifelong member of Zion Lutheran Church.

He will be remembered by his family for so many wonderful traits – his quick wit, good advice and leading the family in prayer. His antics will be cherished by his family and friends forever.

He is survived by:

He was preceeded in death by: