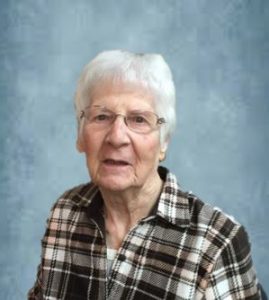 Marjorie was born January 7, 1929 in Lesterville, South Dakota to Frank and Anna (Chodora) Hejl.  She moved with her family to Rogers as a child and attended school in Rogers.   She then graduated from Schuyler High School.  On September 22, 1947 Marge was united in marriage to Kenneth Kroeger in Schuyler, and four children were born to this union.  She was a member of Trinity Lutheran Church in Schuyler where she was a member of the ladies aide and quilting club.

She was preceded in death by her parents, husband Kenny, 4 brothers, 2 sisters, grandchildren Mikayla Anderson, Ben Hoover and Cammi Harter.