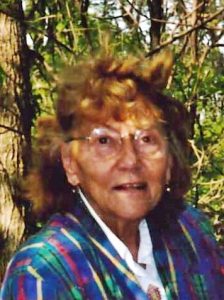 Committal at the David City Cemetery

Eva Frances Greenwood was born December 24, 1922 in Dwight, Nebraska to Anton and Christina (Policky) Krenk. She grew up on a farm south of Dwight.  Eva attended a country school and graduated from Dwight High School.  She furthered her education and graduated from the National Business Institute in Lincoln. After graduating she worked as a secretary in Lincoln, later Eva and her brother moved to California where she worked at Lockheed as a steno pool secretary.

After the war broke out she met Robert Greenwood, a chief petty officer on furlough.  When Robert was sent to Pearl Harbor, she followed him. When he was sent to Yale she followed him there and worked in a rubber boat factory and dime store.  She stayed there until he got shipped out and then returned to Dwight, Nebraska as Mrs. Robert Greenwood.  She taught school in Dwight, and later became the principal.  When Robert came home they bought a farm by Bellwood, Nebraska. There she had her own business delivering eggs door to door in Columbus. She also substituted part time for her husband as a David City bus driver.

She was preceded in death by her husband Robert, parents.