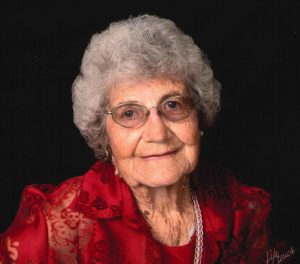 Visitation noon-2 P.M. at the church  Lunch following the service

Committal will be held at a later date

Elaine was born January 15, 1928, near Dix, Nebraska to Fred and Hazel (Voss) Bauman.  On June 20, 1945, she married Elmer Wolta at St. John's Lutheran Church in Schuyler.  They lived and farmed near Schuyler their entire married life.  She and Elmer loved farming and in their spare time were very active square dancing in Harolds Squares.  She belonged to St. John's Lutheran Church, the Ladies Aid, had taught Sunday School and belonged to the Golden Keys Extension Club and the Good Sam Camping Club.