Karrie Healy, 48, of Schuyler, died in a motor vehicle accident north  of Schuyler on Wednesday, October 31, 2018. 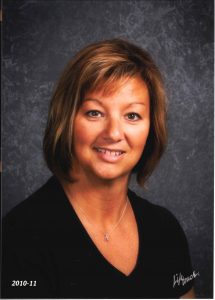 Visitation Monday 3-7 with 7 P.M. Rosary-all at the church

Committal in the Holy Cross Cemetery

Karrie (Heavican) Healy was born June 7, 1970, in Columbus, Nebraska.  She graduated from Schuyler Central High School in 1988, earned her bachelor’s degree in education from UNL, and her masters in curriculum and instruction from Wayne State College.

Karrie was married to Dan Healy on June 20, 1998, at St. Augustine’s Church in Schuyler. They have two children, Kameryn (18) and Nolan (16). Karrie touched the lives of many people in the Schuyler community. The love she shared for every child in town was only surpassed by the love she had for her own. She spent the first 8 years of her teaching career in Butler County rural schools, and the last 17 years at Schuyler community schools.  Along with teaching, she was a member of the Warrior Booster Club and coached the Warrior dance team. She had the heart of a Warrior and showed her love by supporting the Warriors through every season, capturing every moment with her camera. She started dancing when she was 3 years old, and was involved with the local dance studio in many capacities since it began. She enjoyed traveling, spending time on the beach, tailgating, and attending Husker games with friends and family.