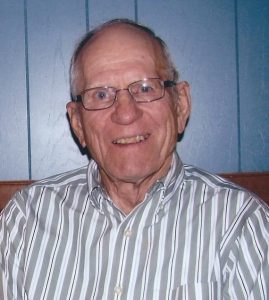 Committal in the Edholm Cemetery with Military Honors

Lunch at the Butler County Fairgrounds

Gilbert Martin Papa, one of seven children, was born on November 7, 1929, to John and Eloine (Hahn) Papa on the family farm west of Octavia, Nebraska.  He attended grade school and high school in Octavia, Nebraska and graduated in 1947 from Schuyler High School.  Gilbert served his country in the Korean War as a member of the U.S. Army from 1951-1953, where he fought on the front line in the Battle of Heartbreak Ridge.

On March 1st, 1959, he married Verna (Jeanie) Heins at Zion Lutheran Church near Garrison.  Two sons, Terry and Ron, were born to this union.  Gilbert farmed and raised cattle with his brother John, and later his sons, on the family farm west of Octavia.   He made hundreds of trips to the Omaha Stockyards and was a cattleman at heart.  He attended many local cattle sales and was a regular at the Columbus Sales Pavilion with a permanent bidding number of 40.  He passed that love on down to his children and grandchildren through 4-H and years of showing cattle at the Butler County Fair.  He and his wife also enjoyed many trips to South Texas during the winter months.

Gilbert was preceded in death by his parents, sisters Phyllis Stout, Margaret Papa and Dorothy Papa, one brother Kenneth Papa, and a brother-in-law Elmer Stout.