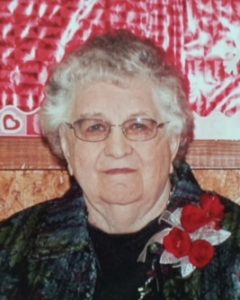 Committal in Schuyler Cemetery at 1:30 P.M.

Dorothy was born January 8, 1930, near Clarkson, Nebraska to George J. and Bessie (Janousek) Blum.  She attended area schools and was a member of Holy Trinity Catholic  Church of Heun.  On February 21, 1950, she married Ladislav  Vondra at Heun. They lived and farmed north of Schuyler until retiring in 1991.  Lad died in 1992 and Dorothy moved to Schuyler in 1993.  She enjoyed quilting, playing cards and visiting with friends at the Senior Center.  Dorothy especially loved spending time with family and grandkids, cooking, baking and caring for her flowers.  She was a member of Divine Mercy Parish in Schuyler and the Schuyler Eagle's Club.