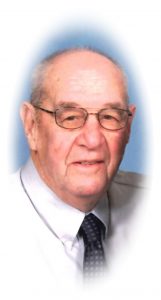 SATURDAY ONE HOUR PRIOR TO MASS--ALL AT THE CHURCH

IN LIEU OF FLOWERS MEMORIALS MAY BE GIVEN TO ST. PETER'S CHURCH

Joseph G. Romshek was born November 16, 1929, in Bellwood, Nebraska to Joseph M. and Ruth (Day) Romshek.  He attended District 76 and Bellwood, High School.  In 1951 he entered the United States Army serving in Korea where he was awarded the Purple Heart.  He was Honorably discharged in 1953.  On February 2, 1956, he married Mary Pat Demuth at St. Peter's Catholic Church in Bellwood where he lived most of his life.  Six children were born to this marriage.

After returning from Korea, Joe worked for Gerhold Concrete Company, Columbus Feed and Seed and eventually took a job with Bellwood Farmer's Coop where he worked as the Feed Department Manager for 28 years, retiring in 1995.  Joe was very active in his community serving on the church board of St. Peter's where he was a lifelong member, 62 years with the Bellwood American Legion Post #327, holding many offices, the Bellwood Volunteer Fire Department for 30 years, serving as Chief for 13 years, coached Pony and Legion baseball, served on the Nebraska and Bellwood Centennial Committees and belonged to the Council of Administration at Aquinas High School.  His hobbies included fishing, gardening, card-playing, sports, daily visits to the coffee shop and especially spending time with his family.  Joe was well known as a good father, neighbor and for his ornery personality.