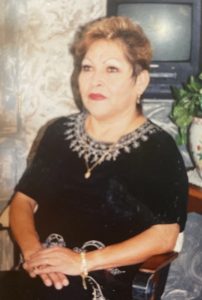 Cremation following with committal at a later date

She is survived by her daughter, Patricia (Primo) Gonzalez of Schuyler, two sons; Gustavo Garcia of Columbus and Richard (Marciela Lopez) Garcia of Schuyler, 7 grandchildren; Patricia, Norma and Richard Gonzalez, Luis, Pammela, Yair and Gibran Garcia and two great-grandchildren, Jasmin and Armani Sancehez.  She was preceded in death by her husband, Arnulfo Garcia and her parents, Abdon Velverde and Clorinda Inga.