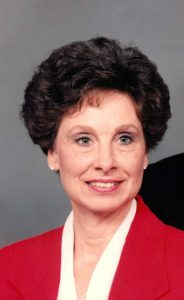 Memorials to the church    There will be no lunch

Roseann was born January 23, 1934, in Schuyler, to Zikmund and Julia (Racek) Divis.  She graduated from Schuyler High School.  On April 7, 1956, she married Joe D. Cada at St. Mary's Catholic Church.  They made their home in Schuyler.  Roseann raised their two daughters and worked with Joe in their Coast to Coast store.  She was a member of St. Augustine's Catholic Church and was very active in the ministry to the elderly..

Roseann is survived by her daughter, Carolyn Peers of Omaha, one brother, Melvin (Janice) Divis of Johnson Lake, Nebraska, son-in-law Robert Wadzinski, six grandchildren, two great-grandchildren and nieces and nephews.  She was preceded  in death by her parents, husband Joe, daughter Mary Wadzinski,  and two brothers, Jerry and Arnold Divis.